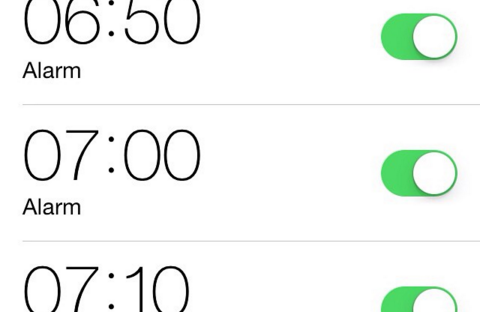 I didn’t have a set bedtime as a kid, ever, as far as I can recall. I slept most nights, but even as a kid I was plagued by insomnia, and it’s only gotten worse as I’ve gotten older. (I sound like a grandpa here. Yikes.) For obvious reasons this reached its peak as I finished high school and plunged into college. I’d like to say that this was entirely due to studying, but I wouldn’t be fooling anyone. I had the mentality that rest was for the week. “I’ll sleep when I’m dead.”

Now that I’m old, not sleeping makes me wish I was dead. Well, almost. I can always find something meaningless to do in the middle of the night when sleep evades me. That’s not much of a consolation.

More often than not I find myself wide awake at 3 in the morning, which it is as I write this. I’ll probably fall asleep sometime within the next hour, but again, that’s little consolation. When I work I rise by 7 at the latest, and a 3am bedtime gives me less than 4 solid hours of sleep. No bueno.

Due to my insane inability to put myself to sleep like a normal human, I have the worst time waking up. I’m one of those people who sets 4 or 5 alarms because I know I’m going to sleep through the first, snooze the second without waking, and hopefully somehow manage to hear a subsequent alarm. I also need highly annoying alarm sounds, because the radio or music will just meld into my dreams.

I’m sure this has got to be more annoying for those around me than it is for me.

On the other hand, I’ve found that an inability to sleep greatly reduced my sleep walking and sleep talking. I guess every cloud has a silver lining…?

I sleep sooner and more soundly when I’m not alone, which I find a bit counter-intuitive. I’m an anti-cuddler, but I guess there’s something comforting about the presence of another person. As long as I get enough room in the bed and my blankets aren’t being hogged.

When I do sleep I tend to have slightly outrageous dreams. I think dreams are fascinating and I always love when I can actually remember what I’ve dreamed (or when I’ve slept enough to have a dream at all!) Having just intense dreams can bite me in the ass sometimes though, like when I think it’s so real that I keep waking up over and over and over and over and over again. Or when I punch the person next to me because I think they’re the bogeyman. I guess we’ve gotta pick our battles.

Right now the battle is just to sleep at all. I have enjoyed being a night owl, sometimes. I don’t usually mind that I’m not a morning person. But really, all I want is to rest my mind, shut myself up for a bit, and to sleep like a log. It’s a curse. The curse is real.

I’m gonna go hold my breath until I fall asleep.