Today two of my sisters are 15 years old. Not only can I remember when they were born, but I have so many memories of playing with them and teaching them and taking care of them. It is hard to believe that it has been fifteen years since we welcomed these twins into our family. Mind blowing.

Antigone was born first, I think about 5 minutes before Mary – this has always been a matter of much disagreement between the two of them regarding who was ‘older’ or if it even counted. Antigone (pronounced An-tig-uh-knee) stands at about four foot ten, has long wavy brown hair, green eyes, and countless freckles. She’s gone back and forth in her short life between being very shy and very social, but lately she seems to have reached a happy medium, which is very good for her. She is beautiful, has a fun personality, and is very smart. 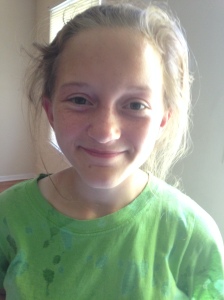 Mary was born second but I feel that she has the more grounded personality, which makes her somewhat unmovable and a natural leader, so if it was a contest between Baby A and Baby B I think she’d come out on top. Mary stands about five foot three, has long straight blonde hair, brown eyes, and a lanky athletic figure. She has always been rather reserved, though she can be loud when she wants to. She is very mature and focused for her age and always has been. She is beautiful, has a fun personality, and is very smart.

Both girls are about to be sophomores in high school starting in a few weeks. Even as freshmen they were taking upper level courses, including a couple AP courses which I believe they already have college credit for! They both play Junior Varsity Womens Soccer for the school team and are both in symphonic band and marching band. They both went to their first band camp this summer, which I hear was quite the adventure. Antigone plays 2 instruments I believe while Mary can almost play 7, but they’re surprisingly not very competitive in that arena. They’re two of the smartest and most talented teenagers I’ve ever encountered, and I’ve met a lot. Oh, they’re also in National Honor Society and co-secretary (is that what it is called?) of the schools TREE club (Together Rebuilding Endangered Earth). Basically, they’re pretty boss.

I know, I’m biased and bragging.

But. I can’t help it. They’re cool. You’re probably sitting there wishing you had younger sisters as cool as mine. All I can say is they learned from the best.

Okay I’m only kidding, I’m a far cry from the sort they could learn any of this from. I am actually quite envious of their success and talent and obviously their good looks. Their youthful outlook on life sure would be nice to have as well. But there you have it. Two little girls who steal my heart every day.