I can’t help but feel that I’ve been neglecting my blog and my far away reader friends of late, and for that I’m sorry. The simple truth of the matter is firstly that I have been on the road for over two weeks, and secondly, that I can’t figure out what to write about. Everything seems too mundane or banal. I know that the rest of my posts up til this time have fit those categories too, but it all seems to repeat itself.

So this post is a form of apology, and a general update on those banal undertakings.

1) Nephew: I’m not a kid person. You might disagree and point out that I willingly taught a class of second grade students this past school year, but I would invite you to review those posts and note the absolutely inexcusable amount of bitching I did about it. What I’m saying is I don’t particularly like kids. But. Liam Michael Ignatius Johanni… he’s a little kid with a big name and he has absolutely stolen my heart. He’s what, three weeks old, and he’s already a lady killer. Here, let me just share some of the joy… 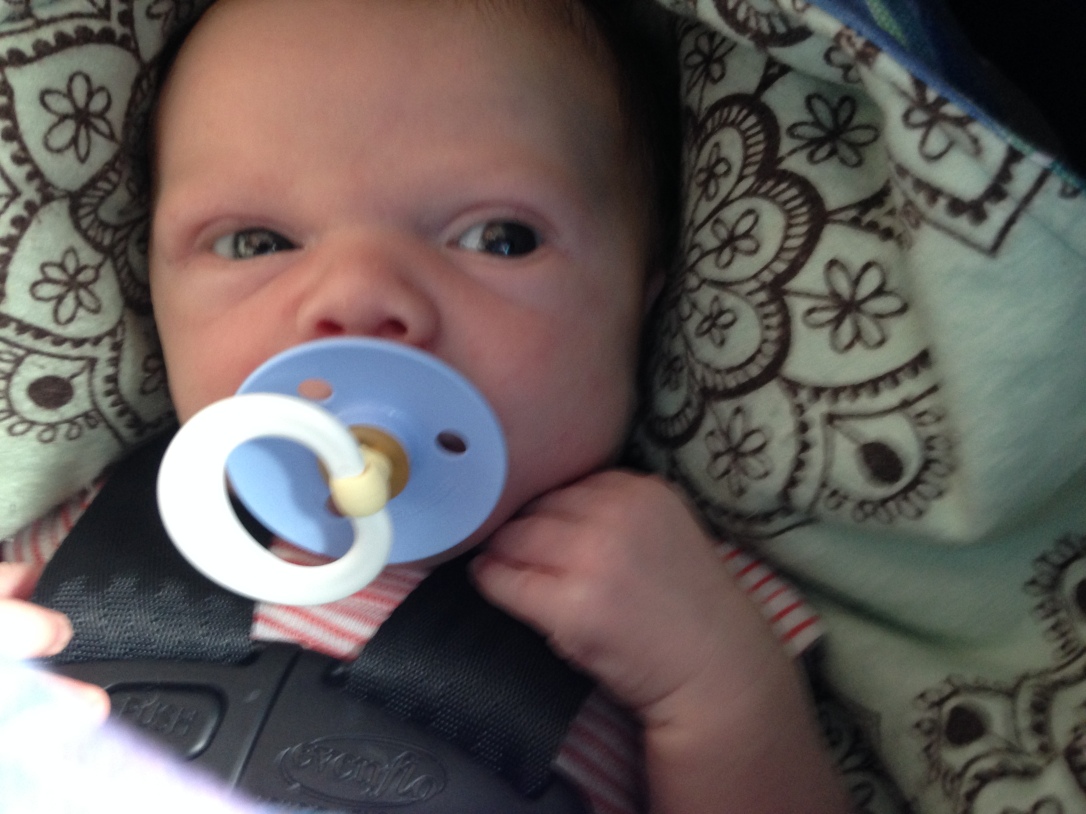 Did I mention that I’m his Godmother? We had the christening last week.

2)Wedding #2: This past week I attended the second wedding of the summer. I know I’ve already written about it being wedding season, but it’s the truth. This time I didn’t drive alone, but with my sister, brother in law, and baby. We stopped for a day in Cleveland before continuing through the night to the wedding in Wisconsin. There were several shenanigans that went on during and around this wedding that I may or may not write further about in the coming week.

3) Road Trips: This ties into (2) because it was on the way back from the wedding, but I view it as a completely separate thing. Because my sis and bro in law were staying a few extra days in Cleveland with his family on the way back from the wedding, and I had no interest in seeing my sister’s in-laws again, I traveled home with a couple of friends from college. They live down in the VA/NJ area, so I arranged to go with them and be dropped in Philadelphia to catch a Greyhound to NH. Well, as my luck would have it (should have seen this coming), we didn’t make it back on time to catch the bus. Despite this set back and the speeding ticket we managed to get and all the near accidents and construction on the highways, it was a superb road trip! I love road trips to begin with, but this one probably takes the cake for most enjoyable time had. We were so slap happy and exhausted that the entire last two hours of the trip we spent laughing until we couldn’t breathe, or see, or until our abs and faces hurt. Truly excellent.

4) New Friends: In the course of attending weddings and taking 24 hour road trips, it’s quite frequently that you’ll run into some pretty neat people you hadn’t known before. In this case we quickly became friends with the brother of the groom, and I think we’ll continue to be friends far into the future, despite the fact that he lives very far away in Britain. Charlie, I’m sorry we may have shocked you with our American ways. Also one of the guys I road tripped back with was someone I’d met at college through mutual friends, but never before gotten to know. Turns out that 24 hours in a car with someone and most of the next day spent with them will really highlight all 45billion things you have in common, and seems to be a great foundation for a friendship. Chuck, I’m sorry for my over-bluntness, sarcasm, and profusion of giggles – hope you can get past that.

5) Peace Corps: My deadlines for getting medical clearance to travel to Ukraine this fall are swiftly approaching, as in one of these deadlines is tomorrow and the other is next week. Because of all the other longer standing commitments I’ve been tackling one by one this summer, I feel that I’ve fallen grossly behind in this process. It’s not for lack of interest or motivation, it’s just that I’m terrible at juggling, and the time passes without you even noticing. Hopefully I’ll have all of that submitted on time by the end of next week and not have to worry about anything but language studies for the next couple of months! I’ll keep the updates coming when there’s something worthy of being mentioned.

6) More plans: So there’s your update about the past weeks’ goings on, more or less. This just leaves us with what the rest of the summer holds for us. So let’s see. We’re about a week and a half out from my 24th birthday, which freaks me out a little, and I don’t like birthdays anyway, so I’m hoping that my family will forget the date as they have in the past and I can sneak through unscathed. Unfortunately I’ve no friends near to party with anyway, and my family would find a way to f*ck up the day anyway, so it’s best left alone.

About a week and a half or two weeks after that I’ll possibly be embarking on an even longer road trip than I’ve ever attempted: NH to ID. That’s nearly east coast to west coast, but not nearly. I’m trying to make last minute arrangements for people to come with me because others backed out and I know I can’t make the drive on my own. I’ll also be devastated if I can’t make it to the wedding at the other end. But I suppose we shall see what happens as it comes.

Once I’m back from that there’s the birthday of my little sisters who are twins and who are turning 15!!! Last I checked they were in diapers so I don’t know how they suddenly are quarter way through high school and looking at colleges…!

Then of course, come end of August I’ll be getting back into the teaching thing as I spend a month as a temporary substitute 4th grade teacher. I suppose that’ll just be another adventure. And soon, so very soon, after that, I will be doing all that last minute packing and all that air fare purchasing and hugging and goodbyes as I set off on what could be the greatest adventure of my life; Peace Corps.

So there you have it. The past the present and the future all in the same post. I hope I haven’t bored you entirely too much. Hopefully next time I sit down to write a post I’ll have some thing more relevant or interesting to offer. Only time will tell.