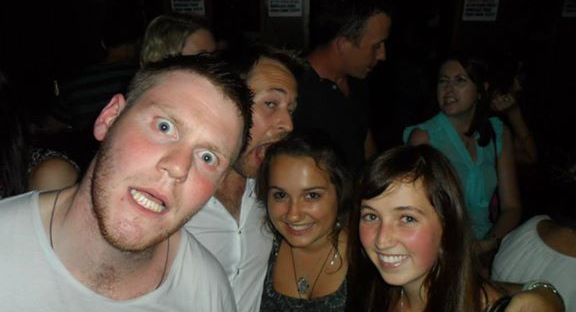 So I’m sitting here taking up much more of the couch than I need to, bottle of white zinfandel in hand, and once again I’ve been thinking too much. This time it’s about friendships, and the nature of nostalgia. Recently I’ve been accidentally thinking about old friends, even to the point where I’ve been dreaming about places I’ve been and people I’ve known. Usually I can go weeks without revisiting these things that require solitude and time to think through, but this week they’re all just there, at the forefront of my mind, waiting to be greeted.

I have had a number of people I’ve called ‘best friend’ at various points in my life. I’m one of those people who have a few who are near and dear to me, and the rest are just pleasant acquaintances. I don’t do well with masses of ‘friends’ who you can’t have a half decent conversation with and who are only there with you while the going’s good. For possibly a myriad of reasons, I’ve either broken ties or lost touch with almost every single one of these best friends. Currently my closest friends are my family, who drive me nuts more often than not. My coworkers are just the strangest people. I don’t mind them, for the most part, but I wouldn’t bet even a penny that we’d be close confidants ever. And that’s okay.

So tonight, as I hug my little bottle of wine, I’ve decided that instead of missing these people and trying to find logic in why I can’t seem to keep people around, that I’d find something in these past friendships to celebrate. Because that’s not ever how it goes in my head. In my head its a series of lamentations, excuses, what-if’s, …the works. It’s regret and confusion and questions that clearly will never be answered, at least not in the foreseeable future.

But tonight is about being happy and grateful and letting my wine be the only sour grapes in the room. (If you can’t tell, I crack myself up. A lot.) Tonight I’m going to think of each of those best friendships, and figure out what was the very best about them, why they worked and why I miss them, why they were the cream of the crop. Maybe if this is the part I hang onto then I’ll be able to find that again in the not so distant future.

My best friends from high school were important, because that was a time when I first reached out for the support I so badly needed from people outside my family. Life was more than rocky, and it wasn’t the typical high school dramas of the day. It was a lot bigger than that, and a lot harder to face. Even when I had best friends that I truly trusted, I thought I could, and should, face these things alone. Maybe that was pride because I didn’t want anyone to know. But when shit hit the fan in the biggest of ways, and the truth came out to my best friends, they were there for me. One in both an emotional and practical way, one in more of a therapeutic way. From these friendships what I appreciate most besides the stupid shenanigans and endless laughs, was my first taste of trust. I didn’t know that people could be relied upon at all, but these two or three people in particular showed me that people could be understanding, compassionate, and un-endingly self giving. Although the realisation that these people exist is still trying to drive its way into my brain, I owe these people for planting that seed of understanding. I would be very far from where I am today without that.

My best friends my first year of college taught me something different. Some taught me that same trust, as well as openness, true interest in my well being, and honesty. Not just telling the truth honesty, but living honestly, without lying to yourself and hiding things from yourself or others. Some of my other best friends that year taught me to guard myself from those who will try to take you for all you’ve got. That sounds sarcastic, or at best cynical, but it’s not. After learning openness and being amazed at its freedom, it was important for me to once again learn to protect myself, my heart, my energy, so that I would not be extinguished easily by the manipulative and self seeking people who grace this earth. That year I learned to trust, and I learned not to trust. Maybe I began to learn prudence.

My best friends my second year of college taught me how to let go, how to live a little, how to let worries sleep for a while. They taught me that I don’t have to carry the weight of the world on my shoulders all the time, even when the going is tough. They taught me that sometimes if you learn how to breathe and how to talk, that you friends can carry some of that for you. They also taught me what drunk meant, and what it felt like to be taken advantage of and lied to. And then they taught me how to know when an apology was sincere and when bits of the past should be forgotten. They reminded me of what abrupt goodbyes felt like and how to act like it meant nothing; a lesson I’d learned long before. Maybe most importantly they taught me that people can tell you they don’t care, when they really do, and that as convoluted as that is, it’s a good thing.

My best friends my third year led me to find out that sometimes being the protector leaves you vulnerable. They taught me that I can keep secrets like nobody else can, when they aren’t mine to share, and sometimes even when they are. I learned that you can talk to someone for hour and hours and days and days and still not be on the same page, no matter how much you care for each other. I learned that there are many ways to love a person, and not even half of them are romantic. I also learned that you can get into an awful lot of trouble for hear-say, especially when you don’t care what people think, to the point where you don’t stand up for your own reputation. They taught me that crying into a pillow isn’t just the stuff of movies, and that it’s something to be avoided at all costs. I learned that year that if you give people an inch they will take a mile, and that to many people ‘no’ doesn’t mean ‘no’. These all sound like horrible things, but they were all lessons I needed to learn, things I am grateful for.

The summer before my last year of college I learned a lot too. I learned to follow my intuition and to accept where it led me. I learned to be free again, but without advertising my freedom. I learned to enjoy the smallest experiences and to see them as the greatest, and I learned to jump at any good opportunity that crossed my path. I learned to step outside of my comfort zone and how to tread water once I had. I relearned how to be impulsive and I loved every moment of that. I learned that being in foreign places shows me more of myself than being at home ever could, and that the world is my oyster.

Tonight the only friend in the room is the empty bottle sitting next to me. I don’t care if that sounds like the words of an alcoholic – nobody ever lost their sobriety drinking less wine than is worth pouring into a wine glass. I’m not sad. A little wistful maybe. But I’m glad for the things I learned from the friends I’ve had. Not one of those lessons would I be better without. And I love all those people, whether they caused me grief or not. I love them and I miss them, and one day I think there will be a time for us to reconnect, and when that happens I think we’ll both be ready for it.