You see these posts these days about how all your friends are married or having babies and you’re just sitting there like ‘pass the vodka’ or whatnot, but when it really gets crazy is when it’s your little sister.

She got married three months ago, and we’ve known for about a month that she’s pregnant, but we just found out today that she is 9 weeks along. Today she had her first sonogram, and the little one inch Peanut Baby is the darn-cutest thing I’ve ever seen.

But I mean, what is this? What is this life, these things that keep on comin around? The part where she’s married hasn’t even sunken in, ya know? Now I have to wrap my head around the fact that she’s having a baby. I don’t think that will be sinking in any time soon my friends. 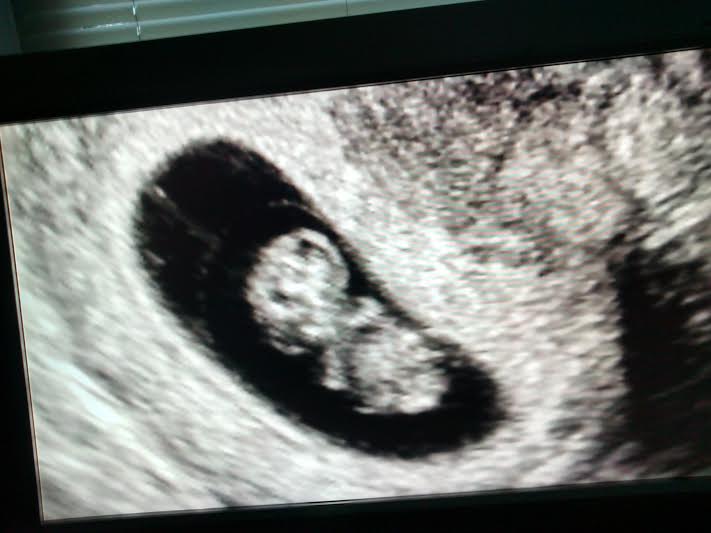 And yeah, that’s right. She’s my younger sister. (Well, one of 5 younger sisters.) My little sister is married and starting a real life family. And here I am blogging and eating extremely sugary cereal because that’s all that’s in my kitchen and I’m too lazy to get off the couch and go grocery shopping.

Flummoxed. That’s the word I guess. I’ve liked that word since I was about six. It amazes me that some people can have come so far and have so much of their shit together, even if they don’t have their shit together, and others can be so very stranded in the middle of nowhere.

With the exception of the fact that I have never been more excited for the new addition of a family member, this isn’t about me at all. That’s refreshing. So many of my thoughts are throttling me, drowning me, scattering me even further than I was scattered before. And man, I’ve been scattered. But this is something new. Something completely expected and yet completely foreign. What it is is one of the greatest things that could happen to this family, on a whole lot of levels, if you ask me.

It’s good for them – they’ll need to grow up a little, step up to the plate, mature faster than any other way. That’s what happens to any parent, no matter when parenthood comes upon a couple. It’ll be good. It’ll be good for me – maybe for the first time I’ll get to see a functioning family not twisted and distorted by passive aggressive hatred. I really need that. It’ll be good for my siblings to see the same thing. It’ll be good for my dad to hold at least one grandchild in his lifetime. Who knows if he’ll hold another. It’ll be good for Ian’s family – they need a little bundle of joy to soften their cold-ass hearts and let their family try to be whole. It’s good for so many reasons.

This is a good thing. Very good.

But where is my life going?