Today is the 22nd Birthday of my next younger sister, Philumina. I’ve been thinking a lot about our shared misadventures lately, and couldn’t help but write her a little tribute post today.

Philumina, or Phil, as my family has always called her, was born when I was just a few months past my first birthday. (We called her Phil her whole life, and it wasn’t until I was a teenager that I realised ‘Phil’ is quite generally a man’s name, so it’s never been weird for me to call her that, but now I get funny looks when I talk of my sister Phil… oh well.) We grew up in northern New York state in the middle of nowhere. In this wonderland of Nowhere, we, and the rest of my brothers and sisters – she is number 3 of 9 – had countless adventures and misadventures. But that is of course to be expected. 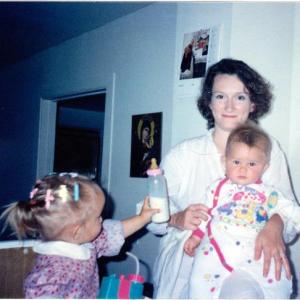 She was quite a fat little baby, but she soon grew out of that. She very quickly turned into more of a Tom Boy than I’d ever anticipated being, but between the tree climbing, snake catching, and wilderness trekking, we managed to get along just fine. She was a lot louder and more boisterous than I, and for a time she had some level of disdain for my quieter habits and more reclusive playing tendencies, so she spent the better part of her time with my older brother Dominic, who was definitely in need of a more deliberate and less accidental snake-catching-buddy than I had proven to be. (Don’t get me wrong, I caught my fair share of snakes and other wild things, I just didn’t make it my daily mission.)

Eventually, as the next younger sister Gabrielle came of age into being able to play more on our level, Philumina grew into the Big Sister role, while somehow managing to keep the Tom Boy bit alive and well. She never seemed to accept her position as younger sibling to myself and Dominic, but regarded herself more as an equal (a fact which bothered me until I was about 13). But with Gabrielle’s beginning forays into the realms in which we older kids would play, Philumina took on the role of Big Sister with a vengeance. She was Gabrielle’s Fearless Leader and Protector (a role she now and again plays to this day).

It seems to me that everything between Philumina and myself was an unspoken (or sometimes very explicitly spoken) challenge. This ranged to everything from snake catching, to who could climb the highest tree, to who could accumulate the most horrendous scars, to who got to be Fearless Protector of Gabrielle, to who could ride a bike first, read the best, or generally pwn life harder.

Eventually, academics became a huge part of our daily competition. From about the 3rd grade, I can’t remember a time when we didn’t work ourselves into a tizzy trying to get higher grades or do better in school. You should’ve seen us do spelling bees! Or latin translations! Or math homework, for God’s sake! It was ridiculous.

When I finished the 7th grade we moved from New York to Michigan. After the 8th grade, when I was about to start High School, Philumina skipped a grade (though I wasn’t allowed – boy how furious I was!) and we both started the high school adventure together. Despite the chagrin that I tried to bury deep inside myself during those four years, I quite enjoyed having her in the same grade as me. By this age, not only had she long ago forgotten that I was her older sister, even I began to forget it, and I saw her more as being a sister that was the same age. I don’t know what it’s actually like to be a twin, but I would imagine it felt much the same as that. The competition continued, even though we didn’t take the same classes, and the challenge may have been all in my head by this point, as I don’t know that it was ever brought up as a real thing again. (Except when I thought I was losing and would throw my version of a fit, which just meant leaving people and sitting alone in silence reading or writing for hours. Then she would come and try to figure out why I was mad at her and I’d tell her it just isn’t fair – you get everything you want and you don’t even have to try, and all I do is try and I end up with nothing which wasn’t quite fair, but let’s be real – that’s just how it all looked from my end).

The long and short of it is that while high school wasn’t great to us, we made it through, which I know may not have happened if I hadn’t had my best friend at my side the whole time (teasing and prodding and causing me endless grief, I might add). Some of my favorite high school memories are of the two of us walking to the bus stop each morning, usually in the cold, and talking. Philumina would invariable say something along the lines of ooh, look at the beautiful sunset! and I would roll my eyes and say sunrise, idiot and we’d laugh and do it all again the next day. We also had our special tree under the bridge a dozen blocks from our house where we’d sneak off to, or go to after school, telling our mom we’d missed the bus and had to walk home. Those were the days. I can’t count the number of times I’d cover for her with my mom so she wouldn’t get in trouble, and there were a good few times that she’d cover for me as well, like the first time I snuck out to do something I was expressly forbidden from going to. 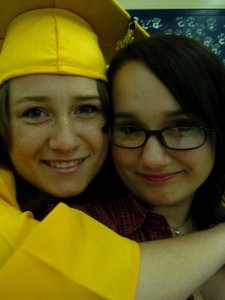 We were veritable masters of the Cover Story, to a point where we had a couple back ups for special occasions when we weren’t actually able to contact each other for the specific story. Genius, I tell you.

I moved away my senior year to live with my dad, so I ended up graduating from a different high school, which just about broke my heart. Our graduations were on the same day so we couldn’t be there for each other’s and that was just the worst. I did make it to go up for her prom and surprise her, but I realised just the other day that we didn’t get a single picture taken together from that night. Oh well.

It was some fluke of the winds that we ended up going to the same college as well. Okay, maybe it was more intentional than that, but not by a whole lot. We roomed together for the first two years of college, and then lived in an apartment together for the next semester, and then we only lived a floor apart for the following year. We may not have spent as much time together in college as we would have liked (we each have different versions of why exactly that was the case, but let’s just put that aside for now). But looking back and perusing photos reminds me that we did have quite a number of excellent adventures together. Most kids don’t go to university anywhere near each other, so the fact that we were as close as we were I think speaks volumes. Plus, whenever we truly needed each other, we were there, even if it wasn’t for the little every day hang outs (which we had quite a number of as well). After our freshman year we didn’t really run with the same crowd anymore, which was okay because our friends suited us better individually, but it seemed to open wide a chasm between our worlds sometimes. 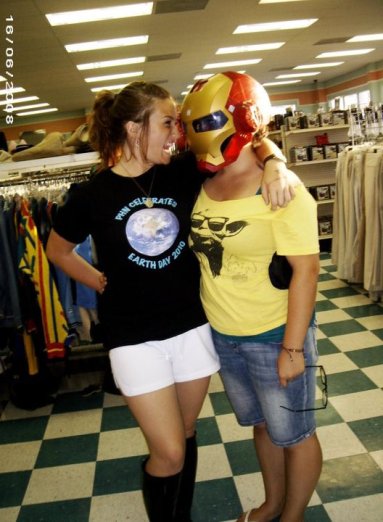 But anyway, we graduated together, even after I took my last semester of school in online courses from home while she was still in Florida. (Yes, we went to school in Florida). That, we have pictures of at least, thank goodness. Happily enough, even that wasn’t the end of our adventures together. She’s married and living with her new Hubby in New Hampshire now, and I live quite seriously only seven minutes away from them. We both teach at the same school (something that neither of us could possibly have known was in the cards for us) – she teaches fifth grade and I teach second – and even though she’s a married housewife now, we still have our little dances with misadventure, or when we’re less in the mood, just our little movie nights.

(Philumina met her now-husband our freshman year, and they started ‘officially’ dating at the end of our first semester. They dated dutifully for four years and then got married, finally, this summer after graduation. He’s a pretty swell guy, which I think is why she calls him Wonder Husband… maybe. Or maybe he’s got a cape in the closet that I don’t know about, but I’ve no interest in checking.)

I like cheesy, but some cliches make me sick, so while I want to say how happy I am that our lives, for the time being at least, have been allowed to remain close, it’s hard for me to say silly things like “where would I be without her”. But the fact remains that I don’t know, as she’s the one who procured my current job for me, among many other influences of hers which have kept me dutifully at arms reach. So maybe we never really considered each other Older Sister and Younger Sister, but maybe there will always be that part of me that wants to keep her close and looked after, even as a grown up married woman. Maybe it’s because she’s a tough little spitfire that I want to be around to help preserve the beautiful little girl that still lives in her heart.

So, all cliches aside, I, ahem, lovemysistertodeath and uh, well. Happy Birthday.

PS: I can’t wait to be your baby’s Godmother, and Crazy Aunt Tess.

1 thought on “My Sister Friend”