There’s nothing quite like a flat tire to catch you off guard and put you in a fabulous mood. Especially if said flat tire occurs soon before midnight when you’re driving alone in the middle of nowhere. Also especially if you discover that you don’t have a lug wrench or a functional car jack in your trunk with your spare.

So last night I’m driving home, and I’ve got about an hour drive, so leaving at 11pm I figure I’ll be there by midnight. I get about half way back, and it’s been raining, and it extremely dark, but that’s my favorite time to be driving, so I’m sort of trying to prolong my drive by actually sticking to the speed limit for the first time in my life. I’m alone in the car, bopping along to a cd and signing much louder than would acceptable if anyone else was with me. At a pause between songs I realise that my engine is running a lot louder than it normally does (and it already runs rather loud). So I pull off the road and pop the hood and think to myself I’ll just take a quick gander to see what I can see. Mind you, I know nothing about cars whatsoever, so I’m not sure what I was trying to accomplish.

I’d checked my oil before I’d driven the hour away to begin with, and all was fine, and I’d been topping up my power steering fluid periodically, as there’s been a leak in that for a while. So I’m just nosing about under the hood, not really knowing what I’m looking for, when suddenly it starts smoking. Now, it had been raining, and there’s more than a chance that some of what I saw was just steam from water coming off the road and hitting the hot engine, but I’m also quite sure that there was real smoke (as in ‘fire’ sort of smoke) coming from the back of the engine. I couldn’t smell anything at all though, so I called my dad and let him listen and asked his opinion. He was quite certain that it was just an exhaust problem making it loud and that I should go ahead and drive home.

So I did. I pulled back onto the road, and not two seconds later, the steering wheel jerks sharply out of my hands to the left. I grab it and straighten it, and then let go to test, and off it goes again. Shit. I’ve got a flat tire now runs through my head. I immediately pull over, less than ten yards from where I’d just been. The driver side front tire is flatter than flat, not a breath left in it.

So I start digging in the trunk for the spare, the jack, and the lug wrench. I get the spare out first, and despite being a tiny donut it seems alright. So I start looking for the jack and realise I can only find half of it. The crowbar bit is missing. That part seems important I think to myself. The lug wrench is missing too. How is this happening to me? So I call my dad up, hoping he could tell me what to do, since now I not only didn’t know how to change a spare, but I didn’t have the tools necessary to be talked through it.

Well maybe some nice guy will pull over and have a jack and help you he says. Just pray it isn’t Freddy Krueger. It being the day after Halloween and me being a girl in the dark in the middle of nowhere, you might see how this isn’t as encouraging as he may have meant it to be.

Sure enough, a minute later, a car pulls over and parks ahead of me. I’m watching it with suspicion, when both front doors open. Oh good I think to myself that’s sure to be safer. Why I would think that, I can’t tell you, but I immediately backpedaled mentally as I saw that both people getting out of the car were tall strong men. Yeah. Cause two Freddy Kruegers will be easier to deal with than just one. What was I thinking??

Thankfully they turned out to be two really nice and super helpful guys, who also happened to have a fully functional jack and lug wrench at their disposal. Jacking the car proved difficult what with being parked off the muddy shoulder of the road and all, and what with the frame of my car being all but rusted out. But they did what they could, and we soon got my spare tire on.

As we let down the jack and the car settled onto the new tire, we were all very displeased to hear a loud Sssssssssssss sound. Yep, sure enough, the spare had a gash in it as big as the first. Murphy’s Law I tell you. This is just my sort of luck. Also did I mention that it was absolutely freezing out and that I wasn’t at all dressed for the weather? Yeah.

Long story, not quite so long, there wasn’t anything more that they could do, so I thanked them many times until they simply ran away throwing a have a good night (as IF) over their shoulders as they departed. I spent quite some time on the phone with AAA Roadside Assistance, who were very helpful but not very organised, and finally, I ended up riding home in a tow truck at 2 o’clock in the morning.

And that my friends, is how shitty luck works.

On a side note, it may be useful to remember that when you’re in a pickle of this kind and multiple people are trying to do what they can to help you out, it’s not actually that helpful to laugh maniacally and bitterly, even though it may seem the best course of action at the time. For some reason, I found each step of the night’s proceedings beyond hilarious, and laughed far too much, with some random swear words thrown in for flavor. I do believe at one point institutionalising me was considered a valid option by some of the people involved. However, I fooled them briefly into thinking I’m sane, so now I’m home on my couch, still laughing. 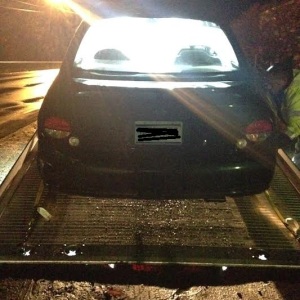 Also I’ve been in too many tow trucks recently. If you want to read that other story, you can find it here.