I’m not the most socially outgoing of people; I rather prefer to sit back and observe. At least that’s what I thought. I suppose what I’d forgotten to take into account is that for the last ten years I’ve been living in towns that had enough people that you never really felt alone. Even if you went outside in the dead of night (take 3am for example), you’d always find at least a handful of people still milling about. There would always be some store open, some thing going on, someone to see. This even applied when I went to the smallest university known to man, in the most remote swamp of southwest Florida. Even in the dead of night there was always somebody around, and odds were, you knew the person.

For the first time since moving out of upstate New York just after breaching my teen years, I’m living in a town that shuts down at 8pm, and that has absolutely nothing going on.

It came as a real shock to me that a gas station would be closed when I was looking for gasoline at 11pm. It later dawned upon me that the reason for the early closings is because people just really aren’t out at that time of night because there’s nowhere to go and nothing to do. Gas stations have no reason to be open that late.

So as a deeply introverted individual, it came as quite a surprise to find that I wasn’t comfortable with this level of emptiness around me. In the time I’ve been here, one month to be more precise, I’ve come to really crave any kind of social atmosphere. This lead me to attend a 250th Birthday celebration for the town of Claremont, hoping that I’d finally encounter all of the small town’s inhabitants. While I find that I was rather successful in this endeavor, I was deeply disappointed with the results.

There are three age groups of people who live in this town. There are very small children. There are obnoxious teenagers. And there are very decrepit elderly people. I don’t think I have yet to encounter anyone between the ages of 20 and 35.

For a while that bothered me, surprisingly enough. But I’ve come to have a different appreciation for the situation I find myself in. I’m in a place where I can embrace a comfortable level of solitude without feeling that I’m missing a lot of what’s going on around me – because nothing’s going on around me. I’m in a place that’s surrounded and composed of some truly beautiful wonders of nature, and I have a lot of time to explore it. I can use this time to recharge, to grow, to think, to read, to write, to breathe. Those are all things I’ve sought time for in the last years and come up empty. So now I have that.

And of course on the weekends when I don’t want to be alone, I only have an hour’s drive to be with a friend from college, and a lot of really cool people I’ve met a time or two, and who could eventually be friends. People can be my Plan B. Even the cool ones I know I’d like to see more often. For now, living and breathing and being is Plan A. 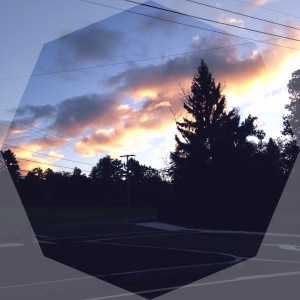